The Marine Protected Areas (MPA) were established in 1991 and are terrestrial, lake and river areas, recognized as being of particular naturalistic value, or which present one or more ecosystems that are important for biological diversity and for the conservation of genetic resources. In Italy there are 29 and they cover an area equal to 19% of the country’s surface; despite that, they are managed in just 2% of the total.

The Marina Protected Area (AMP) of Sinis Peninsula Mal di Ventre Island, established in 1997, has the objective of protecting and enhancing the marine and coastal environment in a total area of 267Km2, between coast, ponds and sea, minimizing impacts, monitor ongoing natural changes and managing possible sustainable activities. It extends to the north from the cliffs of Capo Mannu to slope down to the south in the sandy coasts towards the Sinis Peninsula and San Giovanni di Sinis. The ponds of Cabras, Mistras and Pauli ‘e Sali fall within the marine protected area. It is one of the five protected areas in Sardinia, the second largest marine protected area in Italy. 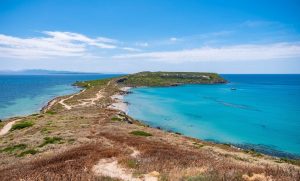 Divided into three areas by different level of protection: area A (areas where it is not possible to carry out activities, except of a scientific nature), area B (some limitations) and area C.  The Sinis MPA Marine Protected Area, together with the operational unit of the CNR of Torregrande, hosts the Marine Fauna Recovery Center, which especially shelters and rehabilitates marine turtles in difficulty, it’s one among the largest centers in the Mediterranean.

The Seabeds of Sinis

The Sinis seabed is mostly sandy and covered by oceanic and coral posidonia, reaching a depth of 40m, the maximum depth for the Western Mediterranean.

Off the island of Mal Di Ventre (Malu ‘Entu, in Sardinian means “island of bad wind”) going south, at a depth of 18 meters, in front of Cala Pastori, is the suggestive “Vaporetto wreck”.

Neither the date nor the causes of its shipwreck are known.

Vaporetto wreck at a deepth of 18 meters, located in the southern part the Mal di Ventre Island, Sinis.

Visiting the Sinis Peninsula Marine Protected Area means visiting Sinis, Cabras and all its most important attractions. Among these, the ruins of the city of Tharros, those of the Island of Mal Di Ventre, the ancient church of San Giovanni di Sinis, and the coastal towers of San Giovanni, Capo San Marco and Cabras and the Sinis Peninsula. The visit to the naturalistic oasis of Seu is particularly suggestive.

Access to the Marina protected Area of Sinis Area Visitor Center in San Giovanni di Sinis (tel +390783371006) and to the Cabras infopoint in Piazza Eleonora.